CAPS: A NEW CENTER FOR THEORY AND INTERDISCIPLINARY RESEARCH IN THE SOCIAL SCIENCES

A new research center has just opened. The name is CAPS, and it wants to put advanced social theory and interdisciplinary work back on the agenda.

By Lars Tønder, Associate Professor and Co-director of Centre for Anthropological, Political, and Social Theory.

”Interdisciplinarity has become all the rage as scientists tackle society’s biggest problems”. This is how the editors of Nature motivate a recent issue on the importance of collaborative work across disciplinary boundaries (17 September 2015, p. 308). In the same issue, one can also read how the social sciences are less interdisciplinary compared to other fields such as biology, gerontology, and chemical physics. While many talk about it, most researchers are reluctant to cite, let alone engage in, work outside their own field of expertise. This is particularly true in the case of International Relations and Political Science, which score abnormally low on most measurements. The result is a significant gap between recognizing the importance of interdisciplinary work and actually doing it. As the editors of Nature conclude, “there is still strong resistance to crossing borders.”

The newly founded Centre for Anthropological, Political, and Social Theory (CAPS) works to overcome elements of this resistance. As its name suggests, the center is an umbrella organization for scholars and advanced students who share a commitment to interdisciplinary research and theoretical work in the social sciences. Overall, the aim is to interrogate and expand the assumptions and theories that underpin the study of “society”. This implies questioning what the social sciences normally take for granted when analyzing specific occurrences in public life. What do the social sciences assume when they study human experience? How do the social sciences define theoretical work in the first place, and what role should this work play in debates about society? Are there better ways of doing theory than the ones currently on offer?

Consideration of these “big” questions about theory has become increasingly absent in debates within the social sciences. This development has contributed to the gap highlighted by the editors of Nature. How is that the case? Most obvious is that failure to interrogate the assumptions underpinning the study of society implies a professionalization of knowledge and an acceptance of the institutions and discourses that the social sciences are meant to scrutinize. A social science that does not interrogate its own assumptions may be useful in the sense of satisfying the demands of our current society; it may even allow this society to work more efficiently by identifying new ways to optimize the use of resources. What it does not consider, however, is whether society as such is haunted by discursive blind spots and structural impasses that preclude us from understanding the challenges in the first place. The result is a vicious circle. Since the social sciences are never fully detached from society itself, there is always the possibility that the theories through which we study society become part of the problem and not the solution. 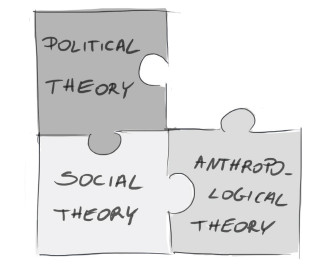 One of the motivations behind the creation of CAPS is that the linkages between ways of doing theory and this line of thinking have become more important than ever. Consider some of the major challenges facing contemporary society – be it global warming, new patterns of immigration, alternative life-forms, or growing socio-economic inequalities. In each of these cases, the concepts and assumptions deployed in our analyses will determine how we understand both the problem and the solution. If we consider humans superior to animals and other nonhuman elements, then our solution to global warming will look different from one based on the idea that humans are part-and-parcel of the environment in which they live. Similarly, our solution to immigration will look different depending on whether we approach the challenge from a national or transnational perspective. Much of this is obvious. Still, without recognizing the problem, asking ourselves what the social sciences assume when they analyze any given phenomena, we may never succeed in advancing the debate beyond the blind spots and impasses in which current theories about society are implicated. What we need, in other words, is not just new theories but also new ways of thinking about theory.

As the editors of Nature rightly note, the obstacles to this project are staggering. Confounding the challenge are also the current expectations to research about productivity and impact. CAPS recognizes this. However, rather than defining a set of fixed ideas to which all participants must subscribe, CAPS orients itself toward something similar to what Hannah Arendt in her essay “Understanding and Politics” called “thinking without banisters,” by which she meant a mode of thinking that problematizes preconceived categories about human experience. Such a mode of thinking seems indeed like a good starting point for thinking about theory in an interdisciplinary manner, especially since it acknowledges the value of publications and public interventions while at the same time insisting on measuring its own success according to how far it expands the capacity for thinking as such. As Arendt reminds us again-and-again, rather than replicating what already “is,” theory should problematize our images of society in order to create new ways of living in a world marked by conflict and plurality.

The day-to-day business of CAPS revolves around this goal. At one level, CAPS may seem fairly traditional. Like most other research centers, CAPS organizes workshops, lectures, conferences, and seminars that speak to ongoing research efforts concerning advanced social theory. Many of the activities are open to the public and will be advertised broadly. At another level, however, CAPS tries to reorient the terms of the debate by identifying a yearly theme (or “problem,” to use another of Arendt’s terms) that brings together approaches and traditions that normally do not interact. Our belief is that this way of doing interdisciplinary work “from below” will enable a range of conversations around which new research projects about advanced social theory can emerge.

The latter takes us back to where we started. A social science that does not question its own definition of society is one that disavows input from other disciplines, including the humanities and the natural sciences. Rather than seeing these disciplines as collaborators, the disinterest in questioning one’s own assumption makes them irrelevant. Sometimes the other disciplines may even become direct competitors who fight for the same glory as oneself. This image helps to produce an intellectual numbness which in turn limits the range of contributions that the social sciences might make to the kind of interdisciplinary work everyone agreess is a precondition for tackling society’s problems. Another important motivation for CAPS is to overcome this limitation.

The first project: Reason and Affect

The first CAPS project is a good reflection of what the center hopes to achieve. The project takes on the issue of “Reason and Affect in the Anthropocene”, an issue that both concerns how we conceptualize society as such and how the social sciences overall might relate to other kinds of theorizing. CAPS has so far organized a series of workshops that interrogate the relationship between affect and reason. These efforts will culminate on May 17 – 20 where CAPS hosts two of the world’s most innovative theorists: William Connolly and Jane Bennett. During their visit, Professor Connolly and Professor Bennett will teach a two-day Ph.D. seminar with participants from Danish and international universities and then deliver two keynote talks at a two-day conference hosted by CAPS. We hope to see many of you at these talks!

For more information—and to sign up for news from CAPS—visit www.sociology.ku.dk/caps/