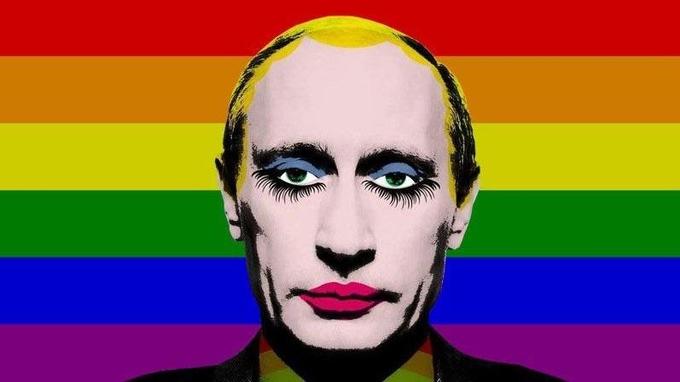 What do Gay Clown Putin-memes have to do with IR?

A hundred years past the Women’s Suffrage Movement in 1918 women and LGBTQ+-people are still fighting against inequality. Like their predecessors they’re using visual mediums like posters, memes or videos to revolt against the patriarchy. Dean Cooper-Cunningham is doing a Ph.D. on LGBTQ+ movements, part of which involves meme wars.

The Women’s Suffrage Movement fought several battles in the Twentieth Century, prior to receiving the vote in 1918. They protested for their right to vote and they revolted against the cultural norms and discourses of their time through pictures and captions on poster boards all over the UK. On that visual battlefield Suffrage and anti-Suffrage organizations fought with brushstrokes and wheat paste to either promote the Suffrage-cause or to present the cause as a danger to society. Ph.D. Dean Cooper-Cunningham didn’t intend to study their use of visuals or images, when he began researching the Suffrage Movement for his bachelor thesis. But he quickly realized that visuals were at the core of the two main Suffrage organizations in Britain as their primary strategy of resistance.

»For the Suffragette movements posters were a way of reaching the public, inspiring actions and reaching people who might not traditionally engage with their material. They also complimented militant and non-militant activities and practices of hunger-striking and protesting in the streets. Basically, you can’t ignore an image. That’s what the research says.«

Since then Dean Cooper-Cunningham has stuck to examining the emerging field in International Relations named Visual IR, which prominent researchers like Lene Hansen and Rebecca Adler-Nissen are trying to understand in relation to international security. His Ph.D examines how images are used to constitute sexual orientation and gender identity based insecurities and the use of LGBT and women’s rights as foreign policy tools in both Russia, USA and a third case. And according to Cooper-Cunningham women and LGBTQ+ people still have sufficient inequalities to revolt against. Be that in relation to sexual assault, sexual harassment, Women’s Marches, pay-gaps, unpaid domestic work or locker room banter, MeToo or Time’s Up.

You can´t have the vote

The Suffrage-movements produced their own posters and were also securitized by the British government. The latter framed the Women’s organizations as dangerous to society e.g. in an anonymous poster saying ‘We want the vote’ accompanied by the picture of a deformed face of a woman bearing the colors of the Suffragettes.

»The caption ‘We want the vote’ is basically saying: ‘No ordinary normal woman who is in her right mind would want the vote, because that is what her husband and other men want. She doesn’t want to screw up society. She doesn’t want to cause chaos.  But if we give women the vote then what we traditionally understand as a woman or man, how society is structured and all the norms and laws that govern society will fall.’ Basically anarchy.«

With that followed posters picturing men doing the laundry or the cleaning. They all told the same narrative of how giving women voting-rights would ensue chaos and disrupt the workings of politics, society and family.

Putin as a gay clown

A century later, visuals have changed but not lost their significance, says Dean Cooper-Cunningham. That was vivid when the so-called ‘Gay Clown Putin’-images emerged in 2014 during the Winter Olympics in Sochi, Russia. The original meme was created in response to Russia’s Homosexual Propaganda Law and was part of huge proliferation of posters, memes, the use of gay pride flags and other symbols as a means of online and in-person physical in-print protest against the law.

»This image that some random guy called ‘crazy_monkey’ online created from home became an online meme. It’s about imposing Putin’s face on a rainbow and queering it: making it as gay and camp and queer as possible. From being posted online that image then became a source of print media that was used in protests worldwide.«

The meme depicting a Gay Clown Putin didn’t just remain a humoristic protest device for LGBT-movements to revolt against the Russian government. As of last year any version of the ‘dragged-up’ image of Putin is banned in Russia.

»Anything that looks like a Gay Clown Putin-meme is now on the Russian Federal List of banned images or radical material. It’s not just the original image but any appropriation of a similar image is banned. A queer gay Putin is illegal; you can’t possess that in Russia.«

Basically, you can’t ignore an image. That’s what the research says.

What we might conceive as a harmless and badly edited meme is now a matter of state security in Russia. According to Dean Cooper-Cunningham this is part of a much bigger political strategy aimed at constituting minority groups like LGBT-people, women, people of color, Muslims and immigrants as dangerous identities who are diluting traditional European values.

Dean Cooper-Cunningham denotes that kind of positioning ‘heteronationalism’. A new concept he’s working on to describe the opposite of what is known as ‘homonationalism’ in the queer-scholar world.

»Homonationalism is saying: ‘We are an LGBT-friendly state. If you are not, we’re going to post sanctions on you as part of our foreign policy for not having gay marriage or LGBT-equality or women’s equality. And we’re going to suggest that you follow our suit’«

According to him the Obama-administration used its so-called ‘pro-LGBT’-policy as a foreign policy-tool against Russia. That policy-tool emerged when Hillary Clinton on behalf of the US stated that ‘Gay rights are human rights’ at her now-famous speech at the UN. Unfortunately, gender equality wasn’t fully implemented in the US at the time:

‘We will save the world from the gays’ is the narrative that comes from them.

»But what is forgotten is the violences that are still committed against LGBT-people in America. There’s not complete equality in America. When Hillary made that speech, gay marriage hadn’t actually been legalized yet.«

In response to homonationalism its conceptual opposite emerged: heteronationalism. Cooper-Cunningham defines the term as a foreign policy tool using state-heterosexuality and traditional values to position a state like Russia as the defender of the ‘real Europe’.

»Russia now positions itself internally and on a foreign policy stage as being heterosexual and actively straight. ‘We will save the world from the gays’ is the narrative that comes from them.«

The power of the meme

Dean Cooper-Cunningham describes how the recent Russian election was influenced by this heteronationalist strategy in terms of visuals. One example is how the Kremlin anonymously published a series of three videos to support going out to vote. One pictures a man having a nightmare that he slept through the election and didn’t vote:

»By not voting chaos ensued. The conscription age was raised to sixty. Putin wasn’t president. Every household in Russia was forced to have a gay in it, they were forced to adopt a gay effectively. There was a tax where you had to pay the equivalent to fifty thousand US dollars for school. It’s saying: ‘If you’re not going to come vote for Putin we’re going to become a gay nation, where you’re going to have to serve in the army and have a gay in the house and everything is going to go to chaos.’«

In contrast to the Women’s Suffrage Movement the visual medium is no longer restrained to posters. Today resistance practices are coupled with visuals like comic books, memes, twitter posts, posters online and in print, fashion, flags, photographs and newspaper cartoons. The meme might even be the new poster, according to Dean Cooper-Cunningham who refers to their way of combining image and text while being appropriated and spread around online. He points out how the meme war on the ‘Gay Clown Putin’-memes is part of a democratization of politics. The fact that anyone with an internet connection or computer editing software is able to produce an image like the ‘Gay Clown Putin’-meme that has the potential to be securitized.

Why it is important

Why are memes important for IR-scholars? According to Dean Cooper-Cunningham visuals are part of something bigger. Something bigger than a potential threat of nuclear war:

»If you’re being killed for existing, that’s a problem. If a state is persecuting its own people for being either a woman, a woman who looks like a man, a trans individual, a bisexual individual, a man who sleeps with men but who is married to a woman, that’s a problem. If the state is allowing them to be beaten up, if the police are turning a blind eye, or if you’re being shot for being a person of color, as we see in America, those are fundamental problems that for me are more important than the threat of a nuclear war between North Korea and USA. Which probably won’t happen because no one is actually going to push the button, are they?«

For Dean Cooper-Cunningham visuals are important because they serve as evidence of maltreatment, evidence of injustice, identifiers of inequality, identifiers of unequal structures, as critical practices in and of global politics, and as securitizing, counter-securitizing, and/or desecuritizing materials. That is why images like the suffrage posters and ‘Gay Clown Putin’ memes matter in International Relations.